I think alot of the misconceptions in Guppy Genetics by hobbyists are based on observations derived from the wrong starting point.  Huh???  How can I say this being an acknowledged livestock breeder who breeds by eye?  Take a peak at the fish below and make an initial assumption on them as a breeder and keep it in mind.  Then, let us back up in time. 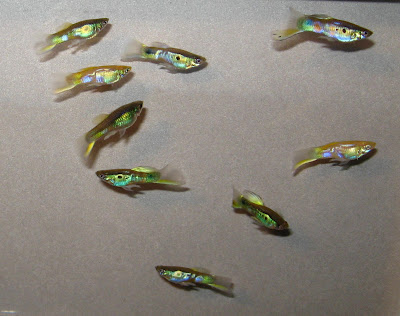 Most traditional livestock breeds are defined on a very narrow range of phenotype with broader emphasis on balancing unique specific traits.  The combination of which not only allowed the breed to survive in its native habitat, but also allowed the breeder farmer to do likewise.  Much like any wild species left to its own devices such as Poecilia Reticulata - The Guppy.


Too my initial dislike, I've come to the conclusion that guppy strains take the form of commercial breeds of livestock.  Most strains survive and thrive short-term based on fad.  Face it, they evolve by breeder efforts and then remain in existence from further interest by future breeders through marketing and availability.  Very few static strains are maintained long-term by scientists in labs or breeders who persist with them for many years.


The number, types and evolution of strains is in continual state of modification, much like any other commercial breed of livestock.  Here today and gone tomorrow.  Little different than women's shoes or men's ties.  In many minimal value is placed on long-term survival traits.  Modern guppy strains are often not unique in a sense of survive-ability, just expressed phenotype.


Is this all bad?  No.  To date it has allowed for a continuing evolution in the diversity of phenotype in most of the world.  Think about it.  For the past 100 years breeding and showing of guppies has been based near exclusively on phenotype.   Those that have built in sustainability and not just the latest greatest fad will continue to influence not only further development, but our understanding of the genetics behind it.


Complex modern guppy strains are often the product of  not only sex-linked traits, but in combination with several autosomal traits.   Is it possible to create and maintain diverse & often delicate phenotypes as strains with built in hardiness?  The answer should be, Yes.  To do so one has to abandon the concept looking at a guppy initially, if not solely, from the standpoint of phenotype.  Ah,  I did it again.


I am a livestock breeder.  A traditional one at that.  As such I breed by eye and experience.  The experience is an accumulation of knowledge passed down from others and first hand, in conjunction with that acquired from sound scientific exploration.  The latter more often than not the result of others efforts.  Face it most hobbyists, myself included, lack the dedication to implement a breeding program based on scientific method.  Much less document and analyze the results by true scientific principles.

Good breeders will always breed by eye and intuition.  Successful breeders of stock throughout history have done so.  Of late I also incorporate much more acquired scientific knowledge into the decision making process.  To borrow a coined phrase of another guppy breeder, one must become " A Guppy Designer."  Did these early stock breeders do the same?  Yes, they did without setting out to do so.  The difference is they were fewer in number and likely had a natural ability to do so in a time of limited scientific knowledge.  This through the power of observation, trial and error.  A practice the continues to this day and will do so into the future.  It is an integral part of livestock breeding.  We are in the business of genetic manipulation.  Not the creation of, as the genetics are already in place.


A breeder must be able to develop an understanding of the basis of guppy genotype.  Not only for color and pattern, but also for less visible traits.  These would include fertility, disease resistance, longevity, docility to name but a few.  By doing so you will be able to not only understand how your particular strain evolved, but also how to maintain and improve upon it.  Modern guppy strains are far to complex to do otherwise.


Often a hobbyist bases decisions on observations of a specific phenotype and not what genetic design it took to create it.  This perception is often instilled by show standards that in effect ignore the principles of genetics.  A sort of "what you see it what you get" approach.  After many years of breeding largely to a set standard for swordtails I found my fishroom in a state of stagnation.  Though always reserving 10-20% of my tanks for exploration, far too many fish were simply being culled on the basis of not meeting standards.  Little improvement in strains and much more emphasis put on trying to just maintain and produce a couple good fish to show next year.


About 10 years ago I decided to take a different approach and let the genetics decide much of when, where and how my fish evolved.  To start with I made a drastic decision to reduce not only the type of strains I raised, but the number.  With only 60 tanks at the time I saw no other practical approach.  These days I am only running 40 tanks and even larger collection of genotype.  Largely Vienna Emerald Green (VEG) and Schimmelpennig Platinum's.  In part compatibility of females has allowed for  a reduction in the number of tanks.

At some point a balance must be maintained to allow for selection of breeders that will produce, sustain and improve upon existing strains when attempting to create new ones.  A balance that derives from genetic understanding combined with a breeders eye in effort to produce not only beautiful phenotype, but viable strains with built in hardiness and disease resistance.


That brings us back to the initial intent of this article.  Based on genotype how would you describe the fish in the very first photo?  Without some understanding of genotype it would be very easy to declare a host of color descriptions and possibly assume the result of a hybrid litter.  These fish will breed true to their type.  All are gold (blond) or grey  in either green or purple body with about half showing the effects of autosomal Asian Blau (Ab) .  While they may be just as diverse in phenotype as genotype they are still basically all one in the same fish.  In fact, siblings from a single litter in a line of my Vienna Type Lower Swordtails.


Over a decade ago I set to undertake a better understanding of the genetics involved in my fish.  A process that is ongoing.  The knowledge gained has  produced a diversity of type in homozygous or heterozygous states.   Resulting in a much greater stability in the fish.  By doing so I hopefully will have created strains that exist into the future.  In a more static state, that mimics a time of traditional breeds and not just a fad...

~~~  Often the most overlooked tool available to a breeder is an exchange of knowledge and the ability to consider what is offered by others without prejudice based upon your own knowledge.  Then let things stand or fall on their own merit or lack thereof  ~~~