Some of you may have noticed I've been on a crusade for a Yellow Swordtail phenotype over the last decade.  But not in a traditional sense of trying to create a fish with yellow pigment in the body.  I raised IFGA type Yellow Delta's for quite a few years back in the 80's and know such a phenotype does not exist.  These fish were pretty much a dull yellow finnage and body color a multi pattern in either green or purple body mutation.  Today the better Yellow Deltas are still blond and often incorporate Half Black, Platinum, Micariff or Metal (Mg) combinations.  So for the most part I've been content identifying and adding color patterns to the body in both my Lower Swords & Schimmelpennig Platinum DS / Lyretails with yellow dorsal / caudal in a study of population genetics.


That is, up until a couple years ago.  Since then I've been focusing on crossover Platinum genetics, concentrating gold iridophores and metal (Mg) into my Lower Swords.  For some reason I have not infused Stoerzbach into my lines, although I have just obtained these genetics.  The Platinum crossover has come about from the several Schimmelpennig Platinum Double Sword lines I maintain via common usage of females across all sword lines.  In addition to the normal green peduncle, which results from Emerald Green Iridescence (EGI), many breeders are familiar with "blue peduncle" in Vienna Swords as an autosome.  A third variant I been able to identify is "yellow peduncle".  Unfortunately,  it has been in a rather rigid complex for with a blunt sword shape even after numerous outcrosses.  Only now am I starting to see some improvement in mature males.

Most breeders of swordtails still prefer clear caudals and dorsals in females as an indicator of her ability to enhance swordshape.  As a rule I still adhere to this principle, though find modern swords can successfully bend this old adage.  I do select for expression of such yellow genes as Flavus or presence of metal in female finnage.   These females will in turn pass the traits as visible expression in sons.  Increase your knowledge of both X-link and autosomes.  By doing so you can reduce your reliance on Y-link genetics. 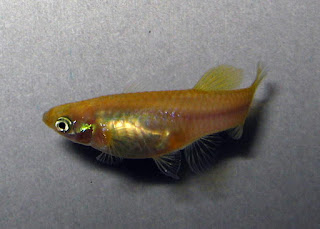 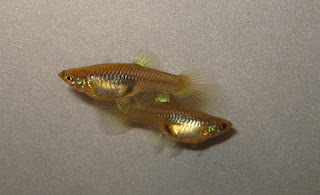 So, when recent publications and research indicate creation of a yellow pigmented swordtail guppy as unlikely why continue? Yellow simply appeals to my eye.  In addition, we have a host of new genetic tools that allow us to bypass yellow pigment in the body.  Thus we can mimic what appears to be a yellow guppy.    You may have noticed my increasing interest in the Asian Blau (Ab) mutation for the last couple years.  Yeah, I can hear the rumblings in the background already, likely for the same reasons this particular mutation never held much attraction for myself.  From preconceived notions it just seems to be a blue / green pattern that would "washout" most of the color in any given strain.  Resulting in similarities found in a combined Red / Blue Grass strain.  Yet, as I wrote about in my last article on the influence of Asian Blau on Japan Blue Swords, this is not necessarily the case.  Especially if one's focus is on incorporating both X and Y-link yellow pigment and autosomal iridescence from metal (Mg) into your strains.  I have managed to breed out most of the genetics for red fins in my lines, and in where I haven't yellow is normally epistatic to red.

From planned mating's and analyzing the results it has become clear that Ab does not just simply remove red from a phenotype.  A goal oriented breeder should always keep in mind that color in a guppy is regulated in multiple zones within both the body and finnage.  Various zones can often seem larger than they actually are when a gene complex combines areas of independent regulation into seemingly larger ones.  Not only are each of the zones in the body often under independent control, but also the caudal and dorsal.  To go one step further various portions of the caudal and dorsal can be controlled as distinct regions from a host of identified genes.

What I realized early on working with Vienna pattern swordtail, which are pretty much a glorified multi pattern, is that color in each zone can be amplified depending upon how they come about.  Do they result from simple color pigment or the presence of Mg or a combination of both to create iridescence found strains.  To produce brilliant colored guppies you must concentrate on iridescence over pigment.  Depending upon your strain it may result in some gaps in color coverage, but the results can be phenomenal.  To create a guppy that glows almost "neon" an additional input is needed.  One that highlights iridophores and Mg.  This is what I have found to be the secret of Ab when you view it as a mutation that adds to effect and not simply as one which removes a portion of existing phenotype.  Ab has the ability to mask dull pigment and enhance the effect of Mg and iridophores.


Ab effect is "overall" on any particular phenotype, or to state in another way, "it modifies all color / pattern on the body evenly".  At first I thought just the opposite as Ab appeared to have zones of effect.  Further breedings revealed these apparent differences in any given male to result from the following reasons:  1.  Absence or presence of yellow color pigment (or any color pigment);  2.  Absence or presence of Mg;  3.  Color of visible iridophores (silver / blue / gold);  and 4.   Independent control of color in body and fins.

In contrast to European Blau (Eb), which is considered autosomal recessive, Ab has been thought of in simple terms as autosomal partially dominant.   Disregarding homozgous Ab individuals, what is particularly interesting about Ab are the presence of males, often in F1 from blau * non-blau matings, who seem not to fit into two basic catagories of blau or non-blau.  Such males exhibit two orange Wingean spots (sometimes a bit lighter than normal), but the body color just seems "not what you would expect".  I refrain from using the term "washed out or diluted" as they are not.  They also seem to lack yellow pigment &/or show reduced Mg in finnage.  Resulting in a blue / green appearance.  These variants hint to Ab being more than "simply partially dominant" as subsequent offspring from this type male when backcrossed to non-blau females (with no blau in the background) has produced at least one regular blau offspring.  This surprised me.   I think if one could produce similar results, while adhering to strict scientific method and analysis of breeding results, it would possibly show a "plus effect" to Asian Blau (Ab+) dominance.

I know that there are those breeders who in a quest to produce a yellow phenotype, or any solid (or predominant) color,  would say that it must be in a grey body to be meaningful.  That in a blond (gold) form is just masking imperfections, such as visible removal of black which is always found in complex with yellow pigment.   While a valid argument from one perspective, it is also flawed for a serious breeder should use any non lethel genetic trait as a tool in a quest to produce desired results.   After all, the more traits we identify & combinations we create, the more we will find that some combinations or results are just not scientifically feasible.  So use your genetic tools to their maximum potential.

When all is said and done my goals have led me to focus in two distinct directions in a quest for a Yellow phenotype.  The first has resulted in Asian Blau Blond Vienna Lower Swords and the second Asian Blau Blond Schimmelpennig Platinum DS.  Please note:  These photos have not been color enhanced in any form or manner.


Random exploration of genetics through test breedings can often prove fruitful in the short-term.
Yet,   for any long-term breeding program to be successful and endure it must first have defined goals and objectives to preserve not only core genetics, but breeder interest.