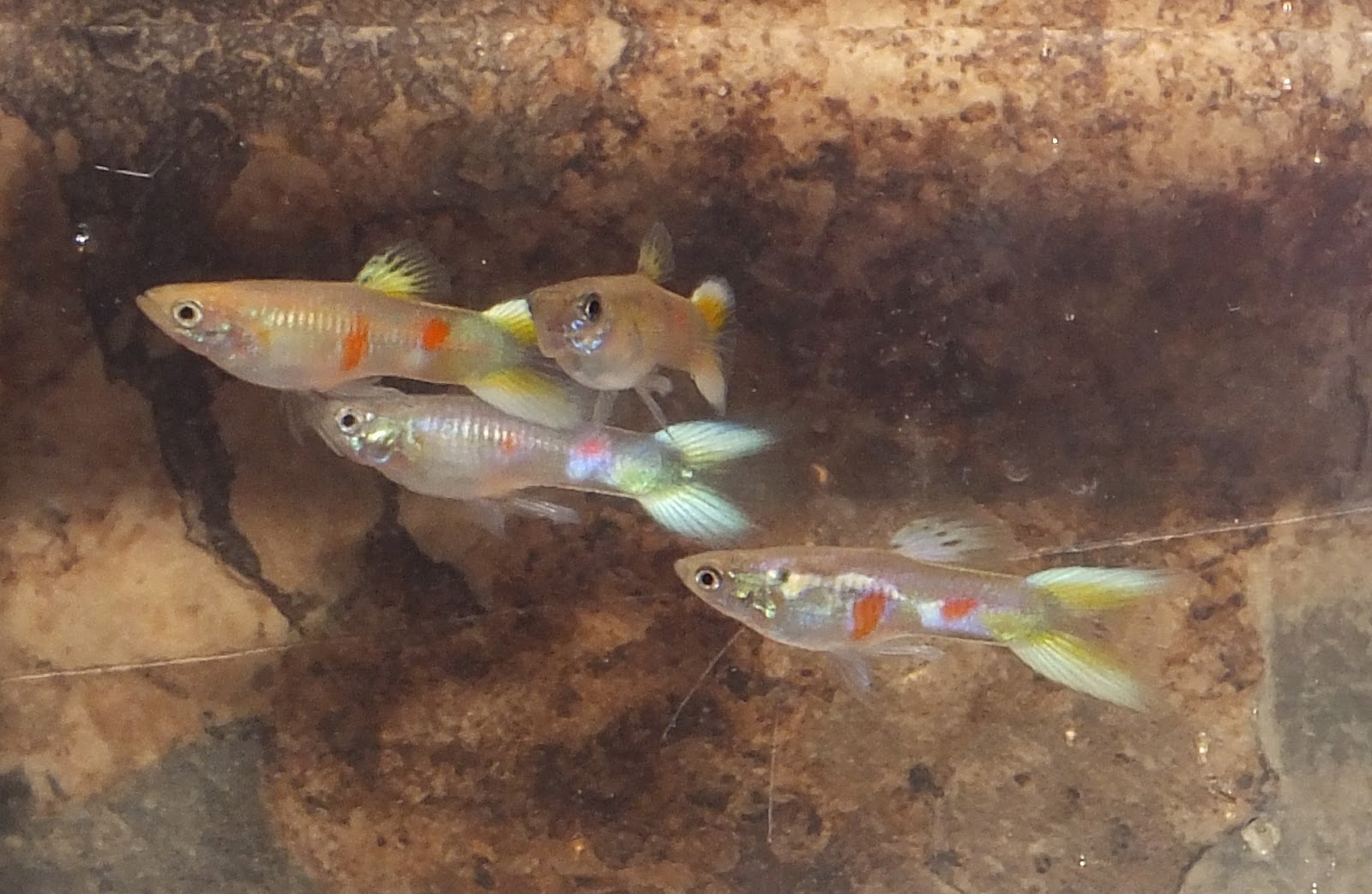 I have been working up a new X-linked Vienna Double Sword (DS) strain since last summer.  A primary goal being to establish a new strain with thicker swords in matching yellow caudal and dorsal that will compete under IFGA auspices.  Starting the strain with my Vienna Lower Sword (LS) males and imported Lazuli Double Sword (DS) females, X-linked for Double Sword trait, from Benson Liu.  So all Y-links and male autosomal inputs for color and pattern derive solely from LS males.  In the F1 initial X-links and female autosomal inputs for color and pattern derive from the imported DS females.  As I expected F1 phenotype pretty much resembled the various Vienna type found in my LS strain, retaining a percentage of Asian Blau (Ab) and Purple Body Mutation (Pb).  This came about by utilizing Asian Blau LS foundation sires with Pb in genotype.  Benson's Lazuli DS strain also incorporates Pb, so this allowed for a high percentage of Pb in the F1.

Unlike crosses involving my Vienna LS and European DS, all F1 offspring were DS.  In the F2 they again segregated out into an equal ratio of 50/50.  Thus, indicating foundation females were homozygous for X-link DS trait.

In many F1 males there was a noticeable reduction in the amount of autosomal spotting and fragmentary snakeskin traits I have concentrated in my LS. But overall, barring expressed at a high rate as both parental strains possessed in makeup.  Many grey body F1 males had an increase in large black melanophore spotting as seen in the following male.


Having imported several grey and blond DS strains from Benson, I prior produced offspring from each to get a feel for the genetic makeup of the females.  Initially finding them to have very strong X-link for DS, and what seemed to be weaker X-link for color & pattern, minimal Metal Gold (Mg) and unknown's for autosomal traits.

Based on initial breeding I suspected that females were commonly used across the various Asian DS strains I had obtained; Vienna, Schimmelpennig Platinum and Lazuli.  With many offspring showing only white caudal / dorsal color or lacking color.  The latter seeming too be common in many Asian Swordtail strains.

Rather than quickly progressing several generations into F2-3-4 and beyond with my new cross and re-enforcing these weak traits for coloration in finnage, I decided to stick with some lateral breedings in the F2-3.  This in attempt to see what I could recombine from foundation sire X & Y-links, foundation dam X-links and autosomal traits of both.

This approach has paid off rather handsomely in males with strong expression of yellow finnage.  Rather surprisingly, in production of some unique body colors & patterns in both LS and DS. Especially those incorporating Purple Body Mutation (Pb) in a rather pleasing lavender coloration.  What follows are some F2-3 DS youngsters just starting to color up.  Their LS siblings are expressing similarly. 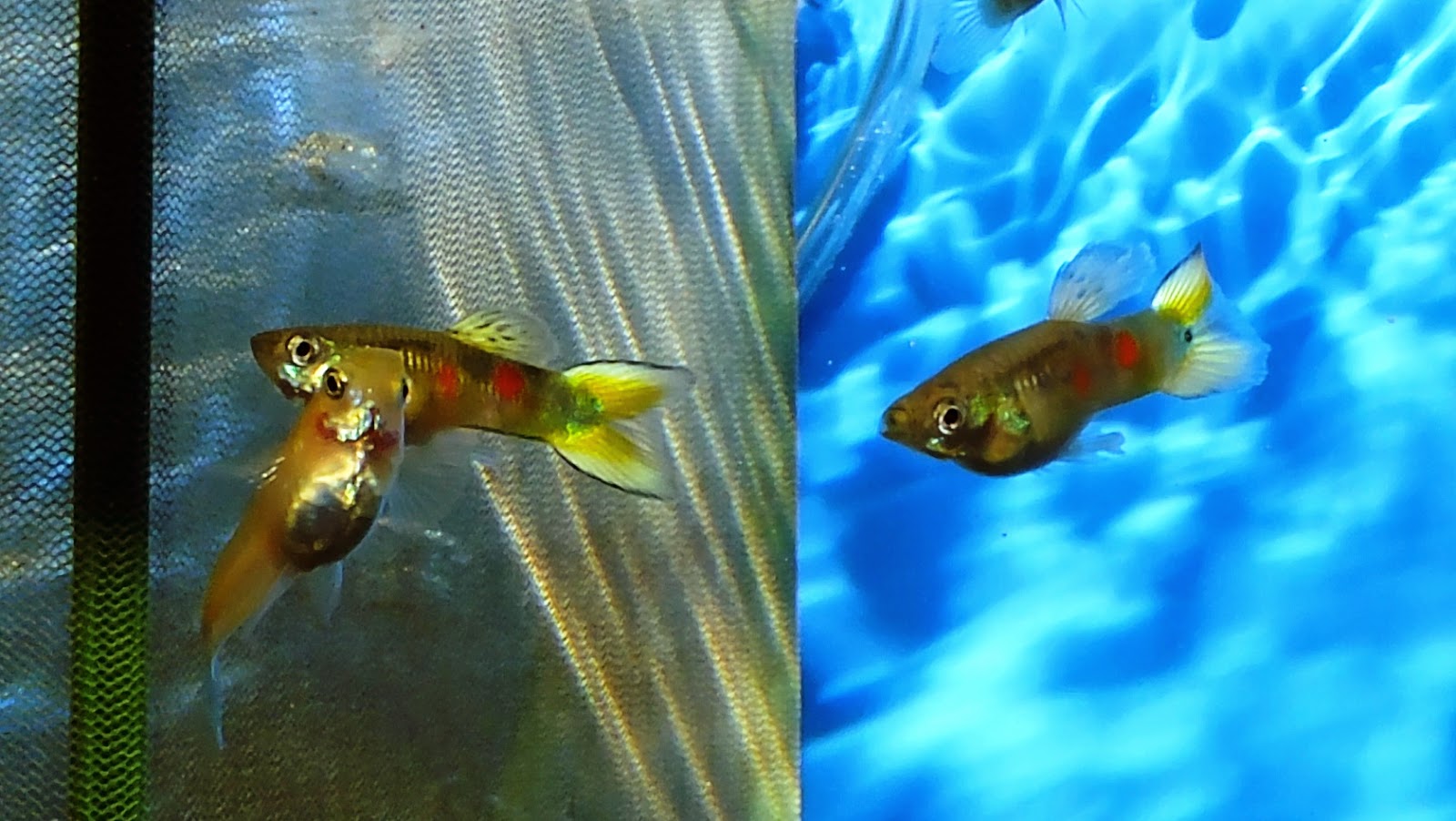 You will notice in the two above males the one on the left possesses spotting, while the one on the right possesses a solid black shoulder stripe.  He does not possess saddleback as does the male below.  But the male with saddleback does express anterior spotting in the middle-lower adomen.  While some of these differences in melanophore pattern are the result of sex-linkage, others are the result of autosomal inputs or even transposons, thus not readily fixed to type. 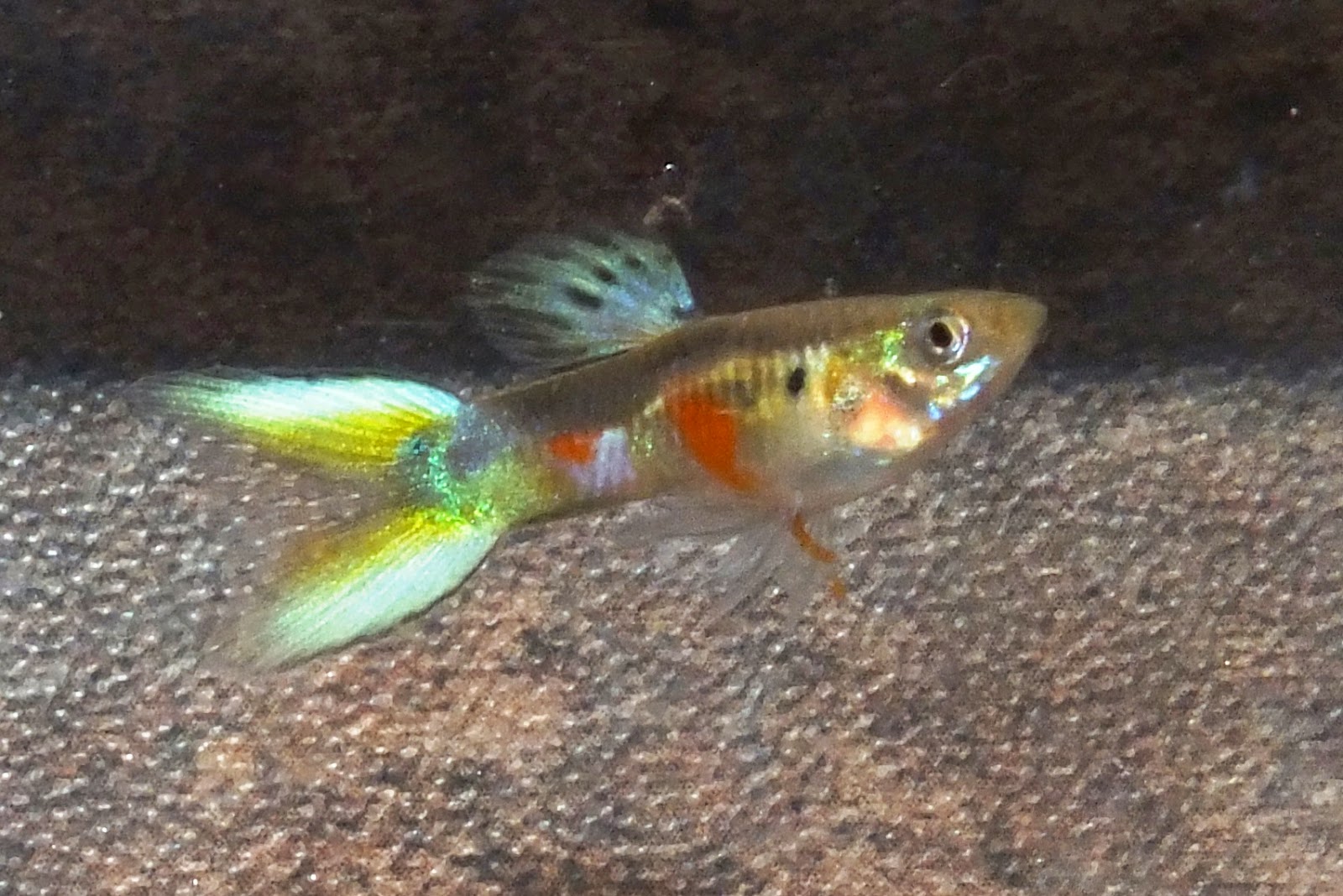 Needless to say, I'm already clearing tank space in anticipation of several breeding groups involving these newly expressed traits.  While creation of solid pattern guppies has its appeal with many breeders, for me the reward is in utilizing the seven natural colors found in wild Guppies to recreate the wonderful kaleidoscope of color found in last nights firework display...

The 2014 Show Season is well under way around the world
with various breed associations.  Show your support and promote
your breeding program with some entries.