A search for origins of iridescence in modern domesticA guppies; if and when did introgression occur?

A search for origins of iridescence in modern domesticA guppies; if and when did introgression occur?
Alan S. Bias

Abstract. The source of genetic inputs in modern Domestic2 Guppy strains has long been a controversial topic in breeder circles. Assumed by many to consist solely of Poecilia reticulata, and considered by others to have multiple inputs from closely related variant populationsB. The attempt of this paper is to demonstrate that sum genotype, in particular for at least one identifiable trait known as Iridescens (Ir), stems from an amalgamation through interbreeding of native GuppyC populations in divergent stages of incipient speciation6; that are capable of interbreeding and surviving in either habitat, and are therefore non-cryptic1. Offspring should not be viewed as interspecific hybrids5 (between different species in the same genus), as they are capable of viable reproduction, lacking any high degree of decrease in reproductive viability. Domestic strains, like wild counterparts in reproductive isolation11 are not speciated. Results are based on 45 years breeding experience of which nearly thirty (30) years have been devoted to strains collectively known as “Swordtail Guppies”, efforts of other professional breeders, and that of the scientific community.
Key Words: swordtail guppy, domestic strains, Vienna emerald, wild-type, guppy populations, reflective qualities, smaragd-iridescens, iridescence, Poecilia reticulata, Poecilia obscura, Poecilia wingei, Cumana’ guppy, Campoma guppy, Endler’s livebearer.

Hypothesis. Based on what we know today, it is likely early 1900’s importations of the Guppy (Poecilia reticulata) made available to breeders contained “iridescent-reflective” genotype (Photo 1), as a result of admix of variant populations. Therefore, future introductions and usage of variants, by breeders, in domestic stocks should be viewed simply as “genetic tools” for improvement. Does phenotypical evidence exist to support admix? 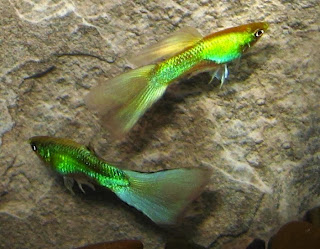 Received: 03 December 2013. Accepted: 16 December 2013. Published online: 20 December 2013.
Author:
Alan S. Bias, Swordtail Guppy Breeder, P.O. Box 1508, Lewisburg, WV  24901, USA, http://swordtailguppies.com/, e-mail: alansbias@aol.com
This is an open-access article distributed under the terms of the Creative Commons Attribution License, which permits unrestricted use, distribution and reproduction in any medium, provided the original author and source
are credited.
How to cite this article: